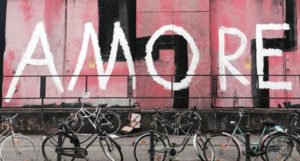 “Mama?” my six-year-old son asked, turning toward me. “Why don’t we just give him money to buy a house?” Solid reasoning, I thought, having just tiptoed across a browning lawn to a man who lay bundled in blankets. He was asleep on a large circular air vent in the shadows of one of the most prestigious universities in the nation. My son did not want to wake him. Neither did I.

We’d been biking down the Midway Plaisance, not far from our home, when we saw him there. I didn’t want to bike past him without acknowledging his presence. Everyone is important, I always tell my son. Everyone matters. So we rummaged through my backpack, found two dollars and a protein bar, both of which we laid gently on the rock next to the man’s head. I prayed this small gesture would be warmly received.

“I wish we could buy him a house,” I said, walking back to our bikes. “Houses cost a lot of money.” My son slipped on his helmet, frowning slightly. “But what we can do,” I added quickly, “is let him know that we care.” That explanation seemed to satisfy him but left me feeling rather inconsequential. Unlike my son, I thought about that man the whole bike ride home. I wondered what might become of him. Would the police arrest him? Was he mentally ill? Would he wake up?

Thinking about what it might take to change his current circumstance, I remembered Dierdre Merriman. Dee, for short. I used to serve her breakfast at Inspiration Café. She and her best friend, Angel, always sat at table two. She always ordered the same thing: eggs over easy, bacon, wheat toast. She always wore the same Winnie the Pooh jeans jacket and carried a Starbucks coffee in the cup holder of her motorized wheelchair. Every guest at the café was either homeless or formerly homeless.

One morning Dee told me her story. “I never believed it. Never in a million years would I have believed that I’d be changed in the way I am now. When I was homeless and drinking and living under a bridge, I’d wish for a life like I have now. But I never had any belief that I could achieve it.”

Fast forward seven years. Dee earned an undergraduate degree in psychology with plans to pursue a master’s degree. She secured housing and began working as a community organizer helping people fight for their rights. She reconnected with her daughter. “There was no real motivation behind me getting sober. No driving force or reward. It’s just—well, I think it was God, myself.”

One day she was at a party with unlimited beer. She put down her drink, turned to her friend, and told him to take her to the emergency room. “When I got there, I told them I had a drinking problem. I don’t know where that came from. But I knew it was the right thing to do.” That day, the day of her last drink, was her daughter’s birthday.

“I didn’t realize it at the time. At the time I was solely focused on getting to where I was going.” Getting sober, she told me was easy. Staying sober is what is so hard. But she was determined. “I had to do whatever it took. And it took a lot,” she said. “I had this shell around me like a rock solid ton of led. I learned as a child that if you don’t let them see you hurt, they can’t get to you.”

“I always knew my mother loved me, even when she was drinking, but I couldn’t feel it. I had no idea how to love. That’s a terrible thing to happen to anybody, especially a child. From the beginning of my life, I never felt love. Never felt important. Never felt like I mattered. I just felt like a big mistake.”

I thought of others whom I’d met at the café. Harry, who had been homeless for ten years and became the manager of the café. He later remarried and moved downstate with his children. The café gave him a riding lawn mower as his first housewarming gift. I thought about Shiriony who was homeless for two years, secured a full-time job as a building engineer, and launched a small floral business on the side. I thought about Rodney and Erick, Kimi and Ericstina, Gloria and Tasha. Homelessness was only one piece of their story.

That’s when I knew what I most wanted my son to learn. Only God knows the fullness of our stories, the limitlessness of our spirit, the aching in our hearts, the wounds that hold us back. We all have them, myself included. I want my son to understand that beauty and pain are intricately connected, that we are called to see as God sees, to trust that there is more to someone’s story than what we can see at any one moment in time—and to respond in love.

Racing back home on our bikes, my son challenged me to ride with one hand, to ride standing up, and to ride with one leg reaching out to the side. We both reveled in the laughter that ensued. Like Dee, and prayerfully that man sleeping outside, our story has evolved dramatically since our hard-fought summer. Wherever we find ourselves in life, housed or unhoused, struggling or free, we all matter in the eyes of God.