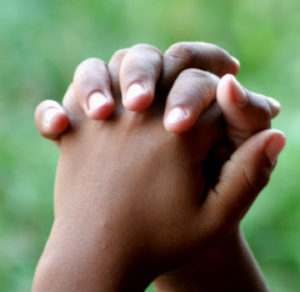 “Walk in,” I pray. “My heart is open.” That’s my prayer when things seem unwieldy and out of my control. Business is slow. My relationships feel strained. I find myself crying once I am alone in the car. It doesn’t much matter what the cause is. The underlying issue is that I don’t know what to do because whatever I’ve tried hasn’t worked. In times like these, when everything feels uncertain, including my relationship with God, I find a mantra helps. I pray the same words over and over again to interrupt my thoughts and soothe the ache in my chest.

I remember praying those very same words one New Year’s Eve a few years back. A colleague’s husband had died. I’d donned my grey winter slacks and black sweater and drove to the church. I had no plans to celebrate that night and no sense of anticipation for the upcoming year. I was three years into a stalled out adoption process. I had redone my home study for the second time and been promised a “match” with a child by the first of July. But I’d heard nothing from my agency. My business was limping along, and I had all but lost my holiday cheer.

After paying my respects, I watched my colleague, now an unexpected widow, stand next to the casket and rub her daughter’s shoulders. She tussled her younger son’s hair and then embraced her oldest son who had withdrawn from college to spend time with his dad in his final weeks. She held her son for so long that everyone in my pew, myself included, had to wipe their eyes. I remember how hard I prayed later that morning to be a good mom, to be a mom like her. I wanted to have that kind of strength, that depth of love, to be that present to my child—whoever that child might be. I was so damn tired of waiting and weary from moving in and out of doubt and anticipation. “Walk in,” I prayed to God over and over again. “Walk in. My heart is open.”

When the mass was over, I pulled on my coat, hugged everyone goodbye, and walked out to my car. I was headed to my brother’s house. My parents were in town, and I planned to say a quick hello to my aunt and uncle who’d come to visit them. I remember looking down at my phone, curious as to who had called me during the funeral. I didn’t recognize the number. I listened to my voicemail as I eased onto the freeway and was stunned to hear my social worker’s voice. She had a match for me. Could I please call her back?

I immediately hung up and called one of my oldest friends. Tears were streaming down my face. “I walked out of a funeral,” I said, “and I got an adoption referral.”

My friend screamed. And then she laughed. She asked what the social worker had said. Had I called her back? “No,” I said, incredulous. “I called you.” Oh, was all she said, followed by a perfectly reasonable request that I pull off the road and make the call. But I didn’t want to be in my car when I got the news. I didn’t want to be alone. So I wiped my eyes and drove to my brother’s house.

My brother and my 8-year old nephew waited expectantly, their faces jubilant, as I wrote down everything the social worker was telling me. I took copious notes and when I was done, I turned to them and said: “There are medical complications.” Radical diagnosis to be exact, according to my social worker, but one that appeared to be treatable. My brother nodded. My nephew inched closer to me. I could hear my heart pounding. “It’s a little boy,” I continued. “He’s a year old. He has an unusual name. It’s not very Haitian.” And then thinking I was speaking in code to just my brother, I named the radical diagnosis, which for the sake of confidentiality we’ll call measles.

“That’s alright,” my brother said, shaking his head and smiling. “Measles is an unusual name but we can work with it.” I was too stunned to speak.

My nephew asked if there was a picture, and I said the social worker was emailing it to me. He and my brother both pointed to the computer sitting in the next room and said, “You’re going to go open your inbox?” But I shook my head. “No,” I said, “I’m going to do research.” I wanted to learn everything I could about the measles. I pulled up the website for the Centers for Disease Control and dove in.

Unbeknownst to me, my brother had gone upstairs to get my two high school age nieces. He told them to go downstairs, that I needed them. My first niece looked over my shoulder and saw what I was reading. She asked rather hesitantly, “Aunt Karen, are you … okay?” I turned around, with tears once again streaming down my face, and said, “I got an adoption referral today, and I can’t stop crying.” “Oh,” she said as tears sprung into her eyes. “That’s a good thing, right?”

“What’s a good thing?” her older sister chimed in, her hair half straightened and half clipped up. So I said it again, and she started crying too. My brother and nephew slipped back into the room and when I glanced back at the measles website, I turned to them and said, “I know. I’m being stupid. I don’t need to do research.” I tried to open my email but my hands had started to shake. So my niece took over. In a matter of clicks, we were all leaning in, admiring his beautiful picture as my son walked right off of the screen and into all of our lives.

I like to hold onto stories like this when I am struggling—unclear about how to parent my son or what my next career move should be or how to talk to a friend who is feeling less and less like a friend. Praying my mantra roots me in the here and now and reminds me of the fidelity of God, of the ways in which the divine shows up in my life—both seen and unseen—and responds to my deepest desires. It doesn’t ever happen on my time table. And it is never how my mind likes to map things out. But somehow, when I trust in the presence and intimacy of the sacred, the bigness of God always surprises—and amazes—me.