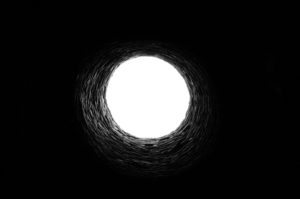 I kill plants. I don’t set out to do this. I doubt anyone does. But still they die. To my surprise, this summer my son and I decided to turn a patch of weeds in front of our building into a garden. I let him pick flowers to honor his birth-mama and his birth-papa. He chose bright red salvia and red geraniums. They are still blooming. This fall marks the fifth anniversary of our family. We adopted each other when my son was just shy of three. We are still blooming too.

“You’re too hard on yourself,” my friends tell me. Five years in the making, my transition into single motherhood has been swift and fierce. I spent eight days in Haiti at the crèche surrounded by sixty children and their caregivers. I woke up to babies crying, a rooster crowing, and my son looking at me with a mix of confusion and expectation. We played from dawn to dusk: my learning his every nuance, his discovering mine. A soiree of cicadas and mountain goats lulled us both to sleep each night.

The morning of our departure, my older brother rolled our suitcases down the steps of the guest house. He joined us for the last three days. A dad of six, he proved to be the most gracious Sherpa. I squeezed the red plastic “air popper” from my son’s farewell party into the front pocket, trying desperately to capture every last moment of his story that preceded me. The final round of hugs that morning made it all the more surreal. Sixteen hours later, my son and I would cross the threshold into my—now our—home and begin our life as a family.

I still remember carrying him in my arms—only twenty pounds at 35 months—down the long narrow hallway into our kitchen. Artfully stacked on the counter were all the last-minute items I’d texted a friend to pick up: his favorite crackers, fruit snacks, my protein bars. As thankful as I was, I could feel this newfound panic rising in my chest. My son of eight days, like most newly adopted children, used food as a comfort. He had no sense of how to stop. He ate three bananas that first night before finally falling asleep in his strange new home.

Those early days together were an adrenaline rush. I woke to a glimmer of sunshine and my son saying, “Ale. Ale. Ale.” (Go.). At 5:02 a.m., we’d roll the now empty suitcase up and down the hallway. We did the same with Tupperware containers, balls that lit up, cars that honked, and an airplane that sang. We ate meals prepared in advance by my oldest sister-in-law. Our first big outing was a walk to the post office. The next was to Target to get a diaper genie. The thought that I might need one had not occurred to me.

The experts tell you to “cocoon” and not allow any visitors for several weeks (some say months). The goal was for my son to learn that he was home, that I was his mama, and that the two of us belonged to each other. I tried my best. Those chilly autumn days were wonderfully exciting and terribly exhausting. The loneliness came in waves, at quiet moments with him laying on my chest, and not so quiet moments when forgotten Kleenex tissues erupted in the washing machine and tiny shreds stuck like magnets all over our clothes.

Friends came at night so I could shower. One picked up my son’s laundry and returned it nicely folded. Others sent gifts and left hand-me-down toys and clothes on the front porch. My family called at night and everyone asked for pictures. My oldest friend kept a nearby restaurant on speed dial. She could always tell by the tone of my voice when I was more hungry than anything else. I felt buoyed and isolated all at once. None of them were there when he fell and split his lip. No one was there when he clung desperately to me. Or when my patience grew too thin.

Being single all these years taught me to stand up in loneliness and embrace it for what it is. When I was in my mid-thirties, I earnestly believed that no one could understand what it felt like to wake up alone on a Saturday morning and not know what you were going to do with your day. How you would fill all those hours or who you’d talk to, other than maybe a check-out clerk at the grocery store (whom I discovered you can only talk with for a few minutes before they figure out you are desperate).

A few years later, in the aftermath of grieving infertility, I decided to let loneliness be my guide. I listened to a dear friend struggle in her marriage. She wanted nothing more than to rekindle the connection she had once had with her husband. But she was so lonely in her marriage that she didn’t want to come home at night. She found herself staying later and later at work. I heard other friends gush about their newborns and then ache to talk with ‘real adults’ as they called them.

That same year, as only grace would allow, I did a short stint as a fill-in nanny. I needed the money, but the window into raising three children was what I secretly feared and desired. To my dismay, I did not speak to a single adult from the moment I dropped the mom off at the train at 7 a.m. until dinnertime. Day up and day down. I asked my sister-in-law about this one afternoon. She is the mother of six. “Oh, Karen,” she said, “It can be terribly lonely.”

I had not known that loneliness was such an equal opportunity provider. Her loneliness was painted on a different canvas—but loneliness all the same. My friend’s struggle was my struggle too. Their joy, my joy. As odd as this may sound, loneliness left me with a deep and abiding sense of connection and compassion. All these years later, it is still with me. Single or single with child, it no longer mattered. One has too much time to fill and one does not have enough time to be fulfilled. Both ache for what we all do: to live into the fullness of who we are.

I don’t know who my son will grow up to be—if he will choose to marry or raise his family on his own—but I want him to know there are times in all of our lives when loneliness finds us. Alone in the dark as I rocked him back to sleep, I prayed to touch that deep well of compassion and communion, that place of connection within us all where the divine dwells.