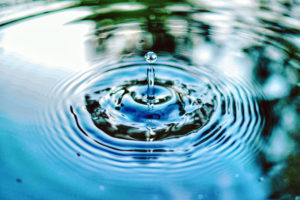 My dream came back, the one where I am drowning. How it happens keeps changing. The first time, I was both on land and in the water (as only in dreams), watching myself sink and disappear out of view. I remember feeling terribly helpless. The next time I went under, I stared out into the vast openness of the deep blue. This time, I was suspended in the water as if I was in mid-air. Floating, drifting, resting. It was oddly peaceful.

That first time, I woke up stunned and deeply shaken. I walked out into the hallway to make sure I was in fact still here. Weeks later, my spiritual director shared with me that water in dreams is often a symbol of the divine. Whether that is technically true or not, the thought of it gave me great comfort. Fixated on a more literal analysis and what it meant that I had died in my dream, I could not imagine any other interpretations. Let alone one that involved God.

This winter when the dream returned, I woke up suddenly with an inexplicable otherworldly sense. It was 4:21 a.m. Aside from going under again, what I remembered most about this version was that I had been bathed in a silence so soothing I didn’t want to wake up. It is always quiet in my dream. There is no screaming, no flailing, no desperate plea to be saved. Only silence.

This instantly gave me pause as I considered the lack of silence in my life—and not just because I share my home with a now seven-year-old little boy who adores his new Karaoke microphone. But because there can be so much noise in my head even when I am alone. Wanting to make sense of it all, I started to survey everything I knew about silence. It seemed like such a rare bird, swooping down into my life and taking me by surprise.

Sometimes silence rocked with me in the dark of night, lulling my son back to sleep. Once it wrapped itself around my friend Karin after she got the call that her dad died. I slid down onto the hardwood floor in her upstairs hallway, watching her hands shake wildly as she wailed and flew from one room to the next, all the while hoping that my lack of words was doing the right thing by letting her grieve freely.

Silence often perches quietly in spiritual direction, waiting for deeper truths to emerge. In those shared moments, the sacred is so palpably present that when we do finally speak, our words come out breathy and light. But what was the sacred trying to do in my dream? Snuggled under my covers in the stillness of that early morning, I realized that I am a big fan of silence and its healing alchemy—and I have completely forgotten how to make room for it in my day to day.

Two days later, silence swooped down in the most unexpected way. I was on day 17 of the best 18-day holiday break my son and I have ever had when I had a full-on adult temper tantrum. (Yep, they happen.) My son was busy playing a rousing game of basketball in Karin’s hallway upstairs and was not the least bit interested in leaving her house to go home and go to bed. He communicated this to me as only a seven-year-old can, and for whatever reason, that night I lost all patience.

“Put on your shoes,” I hollered. “You are a big boy! It is time to go.” Never mind that in my fit of annoyance after having to carry him down the stairs, I’d thrown his shoes and his toys in a grocery bag that was nowhere near where he was standing. Without saying a word, Karin kindly laid his shoes at his feet. After asking me what I needed, to which I curtly said, “Nothing,” she stood silently and watched out her front door as my son and I somehow made it into the car with me shouting ridiculous consequences and generally making the whole situation worse.

The truth is I was mad at myself. Annoyed with him, yes. But in the scheme of little boys, his actions paled in comparison. I knew we were both overtired. I knew early evening is not our finest hour. And I knew just how desperately I wanted our 18-day holiday break to end without any drama. I was so very close to the finish line, but then I blew it. I could have just as easily redirected him without all that pressure and noise in my head exploding out into my words.

But hearing myself against the backdrop of my friend’s silence changed everything. The silence did not judge. It did not offer unsolicited advice. It did not try to contain any of our emotions. Nor did it dismiss them. Rather, silence let it be what it was: a very loud and slightly untenable exhale. Once it was all out, it was easy for my son and I to amend and recalibrate. We drove home singing to his new song du jour, “Volcano” by U2. “Something in you wants to blow.” (Apparently, God really does have a sense of humor!)

I still don’t know what the dream means or why I keep drowning in it, but I get the sense that I need to cultivate more silence, making room for what is and letting it be. In this new year, and what will become my fiftieth trip around the sun, I hope to suspend all those superfluous thoughts and worries and just let myself drift and float … and rest in the sacred.