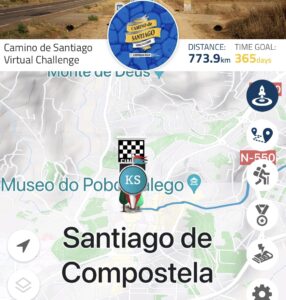 On Easter Sunday, I finished the Camino de Santiago, an ancient 480.8 mile (773.9 km) pilgrimage across the northern part of Spain. It starts in a village in France and ends in the town Santiago de Compostela in Spain. Unlike the medieval pilgrims who first walked it, I did the Camino virtually. I kept track of my steps on my iPhone. Every month I converted them to miles, added them to the app, and watched my initials progress along the map of Spain.

A part of me knew I would finish it, but 480.8 miles seemed daunting. During the pandemic, I did laps in our neighborhood park. Donning my hot pink running shoes, I circled the jungle gym on my way to baby swings. I cruised past the toddler climbing structure headed toward the water splash area. Then around the corner to the sandpit and finally back to the big kid swings. Then I hit repeat—several thousand times over the course of 15 months.

I knew I needed to complete the Camino in a different place than where I walked it. I imagined crossing that threshold in a way that felt triumphant and unencumbered by Covid-19.

So, there we were, on Easter Sunday, my ten-year-old son and I hiking up 14,000 foot bluffs in our winter hats and gloves. I had prayed for warmer weather. But standing there on that ancient rock perch, I took in the mountains, the still blue lake far below, and a magnificent valley that stretched far and wide with sprinkles of green amid swaths of barren trees. Despite the chill in the air, spring felt possible. I felt possible.

It reminded me of what it takes to push past what we tell ourselves is impossible. I did that eight years ago while waiting from my son and I to become a family.

That summer I was given the gift of delay. Only it did not seem like a gift. A stalled-out adoption process rendered me many more months of unexpected waiting. I had already waited 17 months. Angry and discouraged, I privately wondered if I was meant to be a mom. But since there was nothing I could do to alter the delay (and the U.S. immigration system), I decided to do something I never thought I could do. I started to run.

A half-block here, a half-block there. And always followed by plenty of walking. In those days, I used to walk a mile and a half loop around my old neighborhood. It got me out of my empty house first thing in the morning and kept me moving through the delay. In a few weeks I was up to running one full block and three half-blocks which to my surprise equates to a quarter mile by city block standards.

Admittedly, running did not feel so enthralling at first. There was all that heavy breathing. Then, my knees started to hurt. I promised myself a half-block at a time, but some city blocks were seriously longer than others. My running friends insisted on a runner’s high. I thought they were high. No such feeling ever came over me.

But running did have an unexpected effect on me. In between my audible breathing, I managed to take in the landscaped gardens and some gregarious flowerpots. I watched a robin hop across the street with a worm dangling from its mouth. I may have even smiled. My mind was clear. Fresh. It skillfully bypassed all the old, circular pathways of what was missing in my life—a house of my own, a vegetable garden, a gas grill. (Not to mention my son. And a husband.) And it zeroed in on what was right in front of me.

The longer my adoption wait dragged on that summer, the more I ran. And the more I ran, the more spacious my mind became and the longer that openness lingered with me. So many things started to surprise me: how peaceful I was waiting month after month; how content I felt to be home alone on a summer night; how accepting I was becoming of the path before me as a solo mom, even if my son was not yet in my arms.

That summer, my sense of the divine shifted. I knew God wasn’t in the business of keeping track of how many half-blocks I finished. I didn’t think God noticed or seemed to mind how hard I was breathing. Maybe, I argued, the divine was above all that sweat. Or maybe the sacred was right there with me as my knees pounded out eight full blocks on my way to eleven before the summer was out.

More than anything, I understood that God was in the spaciousness of my mind and in the acceptance that followed. God was doing what I thought was impossible: lifting the burden of  unnecessary thoughts and opening my heart to all that is and all that was yet to come.

All these years later, with summer fast approaching and my son quick to wrap up fourth grade, I am in need of that same spaciousness. The invitation to once again push past the naysaying in my mind and keep taking small steps toward the callings in my heart, despite the setbacks and delays that invariably find us along the way. That is our faith walk.

Walking the Camino during the pandemic was a lesson in what is and is not in my control. The Camino was also a reminder that what is possible is just that: possible. That is God’s invitation.