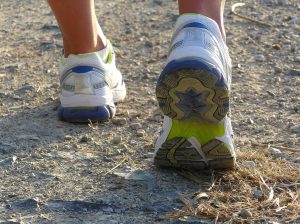 I was 43 miles into my Camino de Santiago pilgrimage when the pain surfaced. Not from the typical blisters or corns. Nor the pulled muscles or sunburn. I’m walking a virtual 480-mile pilgrimage across the northern part of Spain (via an app on my phone). I’d been averaging around three miles, sometimes five, each week. I was finally gaining some momentum when an overwhelming sense of anger became my most unwelcomed companion.

A part of me knew it was time to roll away the stone, but I did not care to look inside the tomb.

Instead, I squeezed in a few more laps. My son, masked in red, was dueling with his friend in the orange checkered mask. The sound of clashing plastic lightsabers reverberated across our neighborhood park. It was muddy and cold, the cement path under my feet circling the monkey bars, swings, sand pit, and jungle gym. Our 20-minute recess break was about to end. I pushed on, shaming my anger into submission.

Shame shifted my focus. Rather than look inward, I started pointing fingers and projecting my anger onto the third-grade teacher, a work colleague who withholds information, the property management company. My son. Swirling with judgment and a tantalizing list of transgressions, I rounded my final park lap adeptly cross-examining the teacher in my mind. She made it clear early on in the school year that my son is not enough in her eyes.

This self-righteousness masked my anger and carried me through that afternoon of Zoom-school and work-at-home. It carried me through many more afternoons exactly like it. But my anger was not fooled. Nor were the arguments playing in my mind. Some slight provocation and I flashed hot. Did-not-see-that-coming mad. The unpredictability scares my son. It scares me too.

Then one night I read this in a book by Ann Cameron: “Pearls are what happen when an oyster or some other mollusk is irritated by the invasion of some disturbing intruder into its closed shell…. A pearl is a disturbance, a beauty caused by something that isn’t supposed to be there.”

My anger wasn’t supposed to be hanging around either. It felt old and unrelenting. Perpetually ignored, shamed, or pushed aside, my anger exploded to get my attention, to be let in. That night, something shifted. I decided to roll away the stone, to sit down in that dark, dank tomb, alone, and listen to my intruder, praying that it might somehow lead to beauty, a pearl, Easter.

First, it led me to more pain. I poured out my anger on the page, tracing its roots, gnarled and wide, through the decades of my life and this past year too. Some mornings, I woke up weeping. But instead of hiding it, I let my tears fall as I beat the pancake batter or sliced cantaloupe for my son’s lunches. I punched pillows and jumped on our trampoline. I talked to people who love me and people who provide professional support. And I kept walking the Camino, lap after lap after lap.

Saint Augustine offered this advice in the fifth century: “It is solved by walking.” Most faith traditions—Buddhism, Judaism, Christianity, Islam—offer pilgrimage as a means of drawing us closer to the divine. Jesus, himself, walked just about everywhere, suggesting that we emulate his ability to pay attention to the lilies of the field as well as the people pushed to the side of the road.

I questioned myself as I walked, thinking back to a mantra I taught my son when he was three years old, when we adopted each other. He’d experienced more loss in those early years than most children, and certainly more than I ever have as an adult. In order to begin healing, the counselors advised, he needed to get the hurt out. My job, they said, was to keep him safe.

The goal was to make room for the feelings, to experience them and release them. Only now I wasn’t so sure my anger would ever let me go. The one-year anniversary of COVD-19 passed. Jury selection for the Derek Chauvin trial started. Spring break happened. I told myself to keep walking the Camino, praying for God to enter the tomb and transform me.

Around mile 79, I felt a new shift. Patches of blue and purple crocuses dotted the park. The trees bragged about their new green hue. Temperatures rose. A tiny burst of energy shot up inside of me. The tension in my face softened, as did my shoulders. I didn’t have to pretend-smile nearly as often. When I sat down on the park bench and tried listening for my anger, I heard the distant babble of a brook instead.

In the weeks that followed, this new energy took shape and form. I ordered new, bright pink running shoes, with extra cushion for my feet. I got my hair cut and styled after 14 long months, happily forsaking my COVID-ponytail. I started taking the first 30 minutes of Zoom-school to take care of me, lifting weights and doing sit-ups again. I taught my son how to dice celery and garlic, and together we made homemade meatballs in the slow cooker.

For the first time in months, I willingly looked out to the future with anticipation (and not the typical dread). I set new writing goals. I imagined summer nights drinking wine on my front porch with friends and neighbors, masked and socially distanced, and still happy. I even toyed with the idea of thinking about dating again. In the place of my anger, a newfound sense of desire and hopefulness swelled.

I knew Easter had finally found me when one night, in the midst of an epic tantrum before bed, I did not explode at my son. We ended up going for a drive, mostly to get out of the house and start fresh. On the way home, he dozed off in the back seat. I parked the car and gave him a piggyback ride to the front door. He nestled his head against my shoulder, like old times.

He ambled groggily down the hallway toward the bathroom. I grabbed his pjs and met him there. He leaned into me hard, wrapped his arms around my waist, and hugged me for what seemed to be a very long time.

Perhaps the beauty of Easter is remembering that anger can be redemptive too—in the same way joy and resurrection are. They each hold the capacity to reawaken our souls. How we listen to our anger—and use the “more” of ourselves that it reveals—is the holy ground upon which we tread.

Today, as I near 100 miles on the Camino, there is a lightness in my step that belies me. I look down at my bright pink shoes and up at the cloudless blue sky, buoyed by the grace of it all.