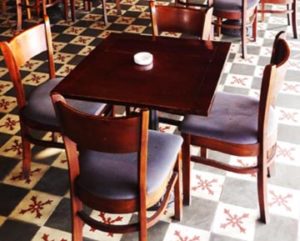 At 5:30 am my alarm clock blared. I snoozed until 6 am, pulled my hair into a ponytail, grabbed my keys and headed out the door. Inspiration Cafe awaited. A chorus of “good mornings” greeted me, along with several hugs. Bacon sizzled in the oven. Diced tomatoes, yellow squash, green peppers, and mushrooms were sautéing on the stove. Fresh cut flowers, donated by a local grocery store, sat in small vases on each of the twelve tables.

By 6:30 am several pots of coffee were making the rounds. Red plastic mugs and the free Red Eye newspaper crowded the tables. Smooth jazz played on the radio. I moved among the tables, taking individual orders and refilling juice glasses. Seafood omelets with hollandaise sauce, breakfast burritos, fresh fruit pancakes—strawberry, banana, mango—the choices went on and on. This was how I loved to start my Friday mornings: volunteering to serve breakfast to men and women struggling—and often succeeding—in overcoming homelessness.

Kevin was new to the café that morning. He shook my hand and thanked me for being there. Mary was quick to show me pictures of her new grandbaby. Howard told bad jokes that made us laugh in spite of ourselves. Janice talked about an upcoming job interview, and Robert gave me the latest in sports. Week after week, we broke bread together. Angel always squeezed my hand when I passed her table, and Rodney walked me to my car when breakfast was over.

Two years into volunteering, I launched an oral history project and started asking if anyone wanted to tell their stories. The majority said, “Yes.” Some said, “No.” I decided to interview anyone who expressed interest. Sidney Wright took me by surprise.

“I know the pain,” he told me. “I’ve seen the pain. You need to see it.” His brown eyes looked right through me. “I want to show you around. Maybe if you see it, you’ll understand it better.” I knew he was right, but I still hesitated. I’d never seen the city through the eyes of someone experiencing homelessness. I suggested a disposable camera, a portable tape recorder, and other ways of seeing. Sidney was steadfast. “You need to see it.”

I decided to take Sidney at his word. One Sunday morning after breakfast we drove up and down the South Side. 35th to 91st Street. State Street to Cottage Grove. The next Sunday we did the same. We made nine stops in all as Sidney described what is known as the trail, the way he and others walked from one shelter housed in an old, deserted public school to another that looked austere and uninviting. A rusted el track ran through the various neighborhoods, along blocks of abandoned buildings and others lined with beautiful greystones and fancy walkups.

We drove past the church he attended on the weekends, part out of desire—“You get a little bit closer, you know,” he confided—and part out of the need to fill the long weekend hours. We parked for a bit outside the last building where he lived before being evicted. He told me about when he used to work as a truck driver. And then, to my surprise, he invited me to his brother’s house not more than five minutes away.

I was greeted warmly. The resemblance between them was stunning. While the two brothers sat at the kitchen table, leafing through the Sunday paper and catching up on the latest family news, I took in their father’s artwork. It was everywhere. Wooden sculptures, oil paintings, African masks. A portrait at the bottom of the stairs caught my eye. A young boy, wearing overalls, was sitting in a large cardboard box, hugging his knees into his chest. Sidney walked over and smiled. He used to model for his father’s paintings as a child.

As we were leaving, I heard Sidney tell his brother that I was going to write a book. He seemed surprised. So I started to talk about the café, and Sidney cut me off. “I guess, I’m a little proud,” he explained back in my car. “I don’t tell my brothers and sisters about my trials and tribulations. They know I was out there but that’s all they know.” When I asked him about his current apartment, subsidized by the café, he paused. “It’s pretty hard out there on the trail. I take two steps forward and three steps backward. Then two steps forward and one step backward … still I’m getting somewhere.”

Over the course of those two Sundays, Sidney reminded me just how rich and complex our stories are—and how very little we know about each other. Being of service, I discovered, is as much about the gift we are offering someone as it is the gift they are offering us. It is an exchange. We change them. They change us.

And when we are open to the exchange, the good we do grows exponentially, breaking down the barriers that seem to divide us and teaching us that there is no “them.” And there is no “us.” There is only “we.” And we are all reflections of the divine.

5 thoughts on “Reflections of the Divine: Embracing the Power of Story”