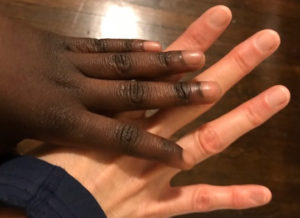 “Poof.” That’s what we call it in our home. My son learned to “poof” when he was five years old. I could see how he was worrying about things that he wished he had not done. I recognized the same in myself. So, I decided that after we talk through and allow our mistakes, as well as make our amends, we put our fingers up to our temples and count: “One, two, three, poof.” Then our jazz hands make it all go away.

Poof-ing doesn’t mean there aren’t consequences for our choices; it just means that we try not to dwell on the slip-ups. I find this rather challenging. My mind has instant replay on demand. But my son’s capacity to dwell has noticeably decreased over the years.

Sometimes as he’s crawling into bed, he’ll ask me if I’d skip anything that day. Some nights I’ll tell him that I’d skip the kitchen sink not working or misplacing the car keys. But on our hardest days together, I always tell him that I would not skip a thing. “But, Mama, what about … ?” he’ll ask softly. “No,” I remind him as I kiss him on his temple. “We already poof-ed it away.”

After all, a poof is a poof. Mercy is mercy. Forgiveness is seven times seventy.

But admittedly, poof-ing my son’s lie about eating his grapes pales in comparison to the soul-searching moments that bring us to the altar of forgiveness: terminal illness, chronic pain, abuse and deceit. I’ve worshipped at that altar for many different reasons and more than once over the unforeseen ending of a trusted friendship. That is, until I started to see a pattern within myself.

Years ago, after jumping into the world of consulting with me, a close friend jumped right out of our friendship. We had worked at the university together, routinely critiquing the senior leadership in the privacy of our shared office. We always said that when we went out on our own, we’d do it right. We’d align our efforts. We’d collaborate weekly. We’d speak the same language on rigor and efficacy. But without a common enemy, we had less and less in common.

She obsessed about money while I was high on my newfound freedom to write. She wanted to charge more than the day rate allowed by districts while I offered to work for free. (Notably, not the best start-up strategy.) I ended up splitting my first contract with her because I didn’t want to be a solo entrepreneur. I wanted a business partner. But the contract was never enough for her. Neither was the work, or the school. Consulting three days a week was more than enough for me.

That first fall (of what would become an amazing 13-year run as my own boss), I attended a business seminar on entrepreneurship and the spiritual path. Nothing about our early days had felt particularly enlightening. I wanted to know what I was doing wrong. Rather than feeling closer to the divine, I felt more and more alone. New anxieties bubbled up. Was my client satisfied with our work? Would the school renew our services? Did I really have to purchase a fax machine?

To my surprise, the seminar leader defined entrepreneurship as having no one to blame. As your own boss, he argued, there is no one above you (and in my case, no one below me either) to chide and rebuke. No one to step in. No one to fault. No one to rescue you either. You have only yourself—with all your strengths and your weaknesses. “If that’s not spiritual,” he said, “I don’t know what is.”

With that in mind, I tried hard not to blame my friend for how our friendship imploded. We worked in the same school but never on the same day. We did not collaborate. We did not align our efforts. We barely spoke. I launched an oral history project and stopped spending time with her family. We tried to amend a few times, but then one day in May, she handed me a bag with a vase, some professional books, and a reading lamp, all of which I’d lent her over the years of our friendship. It felt like the oddest break-up.

Since we were no longer working together, I decided to look inward. I recognized a part of myself that I did not like. The part of me that learned at a young age to hold back, to not share my feelings. To guard my truth against judgement and improbability. By my mid-thirties, I had to accept that sometimes I was too willing to go along with a friendship in order to have plans on for the weekend and someone to talk to after I came home to myself night after night after night.

But holding that bag of returned belongings changed everything. My desire for freedom and my need for self-expression stood firm as I chose to let that friendship go. Had I been culpable, yes. Had it happened before with others, yes, it had. In college. Out of college. But that day, despite my anger and hurt, I understood that I could no longer bury my voice. My authenticity mattered. And it mattered deeply. I vowed to move forward differently.

This past December that same friend sent me a card. Inside was a check repaying a loan I’d given her in 2004. I had long since forgotten about it. Letting go of our friendship had helped me see who I was more clearly. All these years later, I feel no shame about how it ended. No regret. Only peace. Being a solo entrepreneur taught me to accept my weaknesses and to see in them the beginnings of transcendence. The more I forgave myself, the more my strengths flourished—as did many lasting friendships.

That’s why my son and I “poof.” To make room for unexpected transcendence. Seven times seventy.