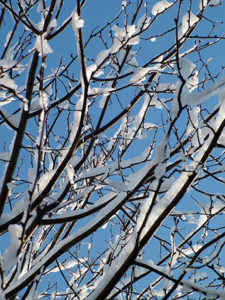 Back by popular demand. Blessings to you this holiday season.

I’ve taken to standing under trees. I pause for a moment or two and look up into the branches. On a snow covered night like tonight, the layers of soft white paint a perfect silhouette and I can see straight through to the moon. My neighbor’s blue Christmas tree lights glimmer off in the distance. The street is quiet. I’ve already forgotten whatever it was I was thinking about.

Looking up can do that to you. The beauty and the wonder of this life can root you in the here and now. I say a silent prayer of gratitude and turn to walk up my front stoop. Standing in the warmth of my living room, I am overcome by a memory of old, of how my brothers and I used to set up the nativity crèche every December.

My mother had inherited the sleek white porcelain figurines that we carefully positioned around our living room. Mary and Joseph found themselves on the first of two square coffee tables. The shepherds and their sheep shared the side table next to the couch where there was plenty of room to graze. The three kings and their caravan of camels and gifts were relegated to the bookcases at one end of the room. They had the furthest distance to travel.

The crèche itself was situated at the far end of the room near the fire place. My mother used to drape the table in white cloth and place slips of fresh holly with their clusters of bright red berries around the periphery. We laid the tiny straw manger in the middle where it sat waiting in silent anticipation. There was always a fight about who got to put the baby Jesus in the manger on Christmas morning. It was a coveted job.

In the weeks leading up to Christmas, my brothers and I would take turns moving each of the figurines one table closer to the manger. Mary and Joseph would table-hop to the second of the two matching coffee tables. The shepherds and their sheep would follow a few days later, with the three kings and their camels coming in a solid third. It was only ever one table at a time.

The magi slowly made their way from one bookcase to the next. From there they trekked to the side table, from the side table to the first coffee table, and then onto the second. Undeterred, they journeyed to the next side table, where they sojourned for several days before traversing across the living room and finding themselves bent on one knee paying homage to a newborn son.

Year after year the trek was the same. It never varied. The predictability of it was comforting to me as a child. The kings clearly knew where they were headed. Their path was known. It was simple and straightforward, albeit a bit indirect. I could think of much faster ways to get to see the baby Jesus after all.

As an adult, I am surprised by how little we know about the magi. The only thing scholars seem to agree on is that the three of them had no idea where they were going. Or what they might find. They didn’t have an iPhone or voice-activated GPS. They didn’t have an itinerary, a return date, or any restrictions on the number of carry-ons they could bring. As the story goes, they followed a star. They looked up. They let wonder be their guide.

It can be so hard to remember to look up. We look down to pay our bills, to email, and to text. We look down to tie our children’s shoes, to check their homework, to slick down their unkempt hair. We look down at our grocery lists and our holiday shopping lists and our never ending list of home repairs. Some days I have to stop and remind myself that I am more than a to-do list.

I need to pause more often. I want to breathe in the vibrance of the blue sky, to savor the laughter of children. I want to be awed by the streams of people I pass in Target, to remember that they are just as blessed as I am. We are all on the same journey. We are all the magi. We are all invited to move our lives forward in trust, letting wonder be our guide.