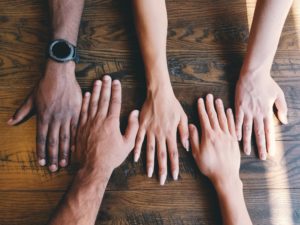 I still remember the day I was the only white person in a crowded school gymnasium. My third-grade students had asked me to come to their basketball tournament. I was 22 years old, teaching in Houston, Texas. I had not been formally trained as an educator and was new to the south. But less than five months into teaching, I sensed how important it is for children to be seen and known by the adults in their lives. I happily accepted my students’ invitation.

That afternoon, I felt every eye on me as I walked down the side of the basketball court looking for an opening in the crowded bleachers. It was a visceral experience, my otherness. I couldn’t escape it any more than I could disguise it. In 1991, the elementary school where I taught—like many public schools today, sadly—was segregated and poor. There were no white students. In their innocence, my third graders often touched my skin. My otherness was as new to them as it was to me.

I doubt that God created otherness. It seems like a human invention, especially given the effort God goes through to remind us that we are all beloved. Those two years at Betsy Ross Elementary School opened my eyes to communities I would have otherwise zoomed past on the freeway. To families I would have judged as not enough. And to a driving passion I would have surely missed had I not had the privilege of greeting all 24 Black and brown faces at the sound of the bell each morning.

For the next two decades, I worked in marginalized communities, coaching principals and teachers to create the kind of schools all children deserve. The work demanded that I continually examine my own biases and rethink my preprogrammed responses. The work also demanded that I do the same for other educators when their biases endangered their Black and brown students: These kids can’t do that… Their parents don’t care so they don’t care… Does the brain research say that all kids’ brains work that way? Our kids can’t infer.

I got used to having hard conversations. But nothing prepared me for having to tell my son how George Floyd was killed. My son is eight years old. He was born in Haiti. He saw a picture of George Floyd on the ground, pinned by an officer’s knee. “Mom, what is that?” he asked. He already knew that George Floyd had died at the hands of the police, but the details I had hoped to spare him. What eight-year-old dark-skinned little boy needs to see himself in that situation and realize that adults can kill you for no other reason than your otherness.

Tears spilled down my cheeks as I explained. My son curled up in my lap. I held him tight. “Why are you crying?” he asked softly. “Because no one deserves to die like that,” I said. “He was someone’s brother, dad, cousin, friend. He mattered. His life mattered.” My son now holds my hand when we walk out in public. My love feels insufficient.

Earlier this year, we watched a movie about Ruby Bridges, who in 1960 was the first African American child to desegregate an all-white elementary school in New Orleans. She was five years old. My son and I watched in shock as adults picketed outside the entrance to the school, holding signs and shouting obscenities. One white mom in the movie screamed repeatedly, “I’m going to poison you.” (And this was the Walt Disney version. I hate to think of what was really said.)

Day after day, despite her innocence, Ruby’s otherness is demonized in one setting. Yet, in her home, she is loved and embraced for her humanity—reading books with her siblings, saying prayers with her mom, playing baseball in the front yard. As a five-year-old, Ruby navigated hatred and love. That day, I named the word racism for my son. I told him that it is real. I told him that the opposite of racism is love. And, that love demands action like the handful of white children who joined Ruby on the playground by the end of the school year.

I also reminded him of what I always say: Difference is the most beautiful thing around. Only this time I added that difference can also be hard. I assured him that as he got older, I would teach him how to respond to racism. Panic flashed in his eyes. “What do I do, mama?” My heart caught in my throat. “You tell me,” I said definitively. “And we will figure out what to do. Racism is an adult problem.” He nodded and started chewing on his fingers.

“I got your back,” I said as I held my son’s eyes with mine. “I always got your back.” He leaned forward and kissed me on my forehead.

I remember how at 41, when I first started to seriously consider adopting a child from Haiti, I sat down with every friend and colleague of color. I asked them: Is adopting a little Black boy too much? I am already single. Is it too much that I am white? To a person, they all said the same thing: Love is love. And, you will have to pay attention to the reality of Black lives more than you do now. It will be different. He will be your son.

It is painfully different. And, yet, profoundly moving to stand in the intersection of two worlds, as I do,  and see the diversity of faces challenging and changing the status quo. The national, and now global, outcry for racial justice gives me hope for my son and the millions of children who look like him. Families of color have had to have hard conversations for centuries. It is time for us to change the narrative. To have hard conversations within ourselves, our circles, and beyond.

My moment of otherness in that packed gymnasium pales in comparison to the racism, both personal and systemic, my son faces. Each of us is a mirror to the divine. And in God’s eyes there is no otherness.

2 thoughts on “In God’s Eyes: A Reflection on Our Shared Humanity”