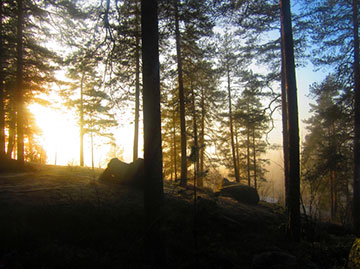 Sometimes I think God likes to play hide-and-seek. Not in the sense that you can’t find God, although I’ve experienced that too. But more that your sense of who God is and how God works suddenly goes missing in the trees behind your house and you’re left with a flashlight in your hand and no one to tag. Relinquishing one way of knowing God for a deeper understanding is a natural part of the spiritual journey. It can happen over and over again throughout our lifetime, if we allow it to free us. I’m standing in that now for the third time in my life.

When I was young, I prayed fervently for my dad to find a job. He had been the chief accounting officer of a large company until a management takeover had other plans. It was the early 1980s, and lay-offs were not the norm. Being unemployed was a source of shame for my dad as well as an immense stress on my parents’ marriage and confusion for me as a child. I wasn’t allowed to tell anyone about it. So I prayed for him at night before I fell asleep. I prayed in the mornings too. I even prayed the rosary on the days he went for job interviews, fingering each one of those fifty beads believing the more Hail Marys I said, the better.

It was a dark time in my dad’s life, a time of upheaval and transition when the road before him was unknown and the road behind him no longer mattered. I remember the arguments that erupted over Sunday dinners, the brokenness in his voice when he finally called his younger brother and told him what had happened, and the looks my friends gave me when he picked up our carpool at school. Looking back on it now, I can see how all that uncertainty led to healing and a softening inside my father, but at the time, when interview after interview yielded nothing in return, I thought I wasn’t praying hard enough.

I didn’t know that the new job offers were asking him to relocate. I didn’t know that he refused to pull us from the lives we knew, from the schools my brothers and I attended, or from the neighborhood clan that played basketball in our driveway and kickball in our backyard. I only knew that my prayers weren’t being answered. I had to be doing something wrong. At that time, my God was a god of giving and taking. Something had clearly been taken. I just didn’t know how to get it back.

But then I lost something I never conceived of losing, and I kept asking God what I had done wrong. That grief changed my understanding of God yet again. The more I healed, the more I came to believe that in God’s eyes there is no brokenness. There is only the wholeness that each of us was born with, the wholeness that emerges and is reborn throughout our lives, which in our sorrow and our pain, we believe we have lost. God, as I came to understand God, is constantly inviting us to live into the essence of who we are. And that no matter what happens to us, our wholeness is never actually lost or broken. It’s just buried deep within.

And now here I am for the third time in my life without a clear sense of how God works. I lost it in the months before the adoption was finalized. There were far too many doctor appointments and blood draws for my soon-to-be son—not to mention a spinal tap—that were all woefully out of my control. I was at the mercy of U.S. immigration doctors and Center for Disease Control recommendations that were temporarily denying my son entry into the U.S. for a congenital condition he couldn’t pass onto anyone, even if he tried. Nothing made a whole lot of sense. I knew God was with us and with everyone who was taking care of him. I was simply too tired to see the wholeness in any of it.

And ironically, as a new mom, sleep has become my most common prayer. At 3:19 a.m., rocking a squirmy PJ-clad little boy in my lap, I pray fervently—“Pleeee-ease God let him fall back asleep.”—with a hundred different iterations on the same theme. I don’t know if God is actually in touch with the sandman, but I’ve gone as far as to ask the angels of mercy to intercede for an hour or two of some serious REM. In my moments of broader clarity and, dare I say thoughtfulness, I apologize to God that our relationship has been simplified to this common denominator. But perhaps it is these very moments when things are out of our control, when we feel so vulnerable, that we are brought closer to the divine. We let go. And God steps in, in any myriad of ways.

Take the other day. After an hour of rigorous shoveling, I could not get my car out of the snow, and I burst into tears. It was two days after a blizzard. I was going on day five of being sick and day three of being housebound. Not a good combination. I was trying to get to the doctor. My son was snuggled in the car seat, listening to Haitian music, and periodically giggling when I tapped on the window. Standing there, under the bright blue sky, which normally would have made me happy, I said every swear word possible. I didn’t care how God showed up. I just needed somebody to show up.

My son, of course, was rather displeased that we did not actually go anywhere. “Alle,” he kept saying. “Go.” It did not enhance my mood. Once I got us both inside, I called a dear friend who is also a new mom, and she understood instantly. She offered to order us dinner so I didn’t have to cook that night. Another friend brought her two young daughters over to play, which was a fabulous distraction, and then she went outside and freed my car from the mounds of packed snowplow debris I could no longer lift. And, an old friend sent me a card that arrived that very afternoon and reminded me that I really am a good person, apparently generous and kind too. I’d completely forgotten.

Needless to say, I’ve decided to give up trying to figure out how God works. And I don’t think God minds. It feels rather freeing to just experience the sacred and not worry about the how or the why. I trust that a new knowing of God will emerge in its own time. And that God will reveal to me once again how deep love truly is and how little else we really need to know.