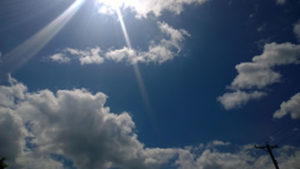 I take long drives these days. My four-year-old son, for whom our recent move was more traumatizing than either of us knew possible, has taken to napping in the car. It’s an easy drive out of the city, past the outlying suburbs, and into fresh air. Rows of browns and greens stretch out across the horizon. The sky opens wide. And the clouds begin to speak. Go out beyond your wildest imagination, they seem to say. And live.

I remember when I started the adoption process years ago, I prayed for a new “adoption” friend. Since a husband was seemingly off the table, a single mom who was also adopting from Haiti seemed like the next best thing, and perhaps even better. But no matter how hard I tried, no one I met in those early years really clicked. I remember arguing with God about this. It didn’t seem like such an unreasonable request, especially in the light of all the paperwork and what would turn into a 22-month wait to become a family.

When I was finally approved to travel to Haiti for the first time, sans my new adoption best friend, I asked my oldest friend from college to come with me. Karin readily agreed. Several close friends, cousins, and nieces and nephews also offered to go with me. I decided to ease up on God a bit. I wasn’t feeling quite so alone in my journey after all. Little did I know how much that trip would change the landscape of her life. In the weeks before we left, my friend learned that she was part Haitian—her great grandfather emigrated from Haiti in the late 1800s—and her 8-year-old son repeatedly implored her to consider what a good big brother he would be.

Sitting at the gate the morning of our departure, I was overcome by the impossible mix of anticipation, excitement, and terror that comes with flying to another country to meet your eighteen-month-old son for the first time. It surged without notice. Thankfully my friend stopped trying to rationalize it. I just started announcing “free-floating,” and her voice would fill with compassion (and patience!) when I stumbled getting onto the plane, misplaced the customs forms, and repeatedly checked my bag to be certain I had all the papers I needed for the U.S. embassy visit later that week.

When the two of us finally walked into the dimly lit baby room twelve hours later, my friend started to cry, blubber actually, when she saw my son. I, on the other hand, knelt down beside him and gently touched his fingers wrapped around the bright blue slats of his crib. My son loves to reenact this moment. “TiTi Karin cried, mama,” he says. “And what did mama do?” I ask. He smiles wildly. “Mama kontan anpil.” (Mama is very happy.) “Yes,” I reply, holding his soft face in my hands. “You were the most beautiful boy in the whole world. It was the happiest moment of my life.”

Sleeping in the crib right next to my son was a baby girl born without eyes. I remembered the social worker telling me that my son liked to play with a blind girl, that he often pushed a toy between the slats of their cribs. Karin reached into her crib and started to rub her back. To her surprise, the little girl immediately placed her hand on top of hers and held it there. As the week progressed, she cooed whenever Karin held her. She ran her hands across Karin’s face, up and down her arms, and over her fingernails. And she cried mightily if Karin tried to put her down. Karin acquiesced happily.

On the second to last morning of our stay, my friend woke up crying. In her dream, her son was standing inside an open door and inviting her to walk across the threshold. “Come on, mom,” he’d said, smiling. I knew my friend never wanted to be a divorced mom raising her son alone. I knew she wanted a house full of children. I couldn’t help but chuckle at how obvious the dream had been. Karin sighed and laughed a little bit, too. And then I looked at her, stunned, and said, “I had no idea my new best adoption friend would be you.”

Three years later, almost to the day of that first meeting, I flew to Haiti to help Karin bring her beautiful little girl home. I had the privilege of witnessing her daughter’s send-off party. I helped strategize the airplane bag for the trek home. And I knew just what to do when Karin said “free-floating.” In the moments when all those new airport sounds were too much for her daughter, I sang a Kreyol song about butterflies that magically soothed her and made her smile. And later that night, back in Chicago, I watched with delight as my friend’s son stepped into the role he’d been aching for, that of her big brother.

The grace of it all amazes me still. Someway, somehow, we all find our way home—back to ourselves and our deepest desires. I don’t really know how it works, but I believe the giver of all life wants us to live into every part of ourselves. It doesn’t matter how long it takes, only that we respond to the call. I glance over my shoulder at my slumbering child and give a nod to the wide array of clouds overhead. My friend and I went out beyond our wildest imaginations, and now her daughter and my son will have a lifetime of friendship to share.

2 thoughts on “Go Out Beyond Your Wildest Imagination: A Story of Homecoming”