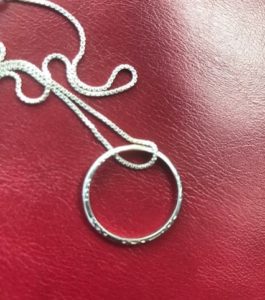 It’s been a long year and the summer is finally upon us. I am still wearing my grandmother’s wedding ring that was gifted to me from my mom. It is my daily reminder that God is faithful, opening our lives in ways unimagined. May this summer bless you with unexpected gifts and renew us all. I’ll be back online in August.

I dated “Jesus” the summer after I graduated from high school. It was a brief romance. His real name was David. He was the lead (aka Jesus) in my all girls high school production of Godspell. Stocky with wavy hair, “Jesus” made us all swoon. I remember coveting my friend’s role on stage. She got to sing By My Side and look longingly in his direction as he stared out into the audience. “Where are you going? Can you take me with you?” But we all knew that “Jesus” was already taken.

The next spring, as it happened, “Jesus” took a job in the pro-tennis store next to the ice cream shop where I worked. In the afternoons, usually around 2pm, he’d come in and order a vanilla milkshake. I thought it best to give “Jesus” an extra scoop. Rumor had it that he and his long-standing girlfriend had broken up. She’d given him his school ring back, the one she’d worn prominently on a silver chain around her neck. Her school uniform looked so empty after that.

One afternoon that June, instead of ordering a vanilla milkshake at the counter, “Jesus” walked over to me as I was frosting an ice cream cake. My cheeks flushed when I remembered the dried chocolate ice cream, mixed with frosting, smeared on my plastic apron. “Would you like to go to a movie with me?” he asked softly, sporting a noticeably clean, pale pink polo. Of all my teenage imaginings, I had not foreseen this moment. I wanted nothing more than to say yes, but I said no.

I was happily dating an artist and a long-standing friend of the family. I had planned to ask him to the freshman Christmas dance when my best friend announced that she already had. I considered writing Dear Abby for advice, but instead I swallowed it. Four years later I asked him to prom. That night, we went down to the inner harbor in our color-coordinated prom attire. I remember watching the moon skip across the water and soaking up every word as he explained how he captured that in his paintings.

“Jesus” tried to smile. I offered to make him a milkshake, but he declined. I stood there, stunned and crest-fallen, holding a spatula of frosting and watching him walk out. I replayed the scene endlessly until my mind took over. I was leaving for college in two months; my beau was not. My father always told us to never follow anyone for love. I convinced myself that I did not want that for him in his final year of high school. But what I really wanted was to date “Jesus” simply because he was interested in me.

A few weeks later I ended my relationship over a milkshake and fries. I’d never broken up with anyone before, and the confusion on his face told me that he had not foreseen it either. A few days later I walked into the tennis store, and as it happened, “Jesus” was already dating someone else, another classmate and friend of mine. He confessed this to me on what I thought was our third date. I reluctantly agreed to be friends. But I knew in the deepest parts of my teenage soul that I had made the wrong choice.

I’d traded something real for something fictitious, for stories I created about who I imagined “Jesus” to be. It is easy to do, for me at least. I have done the same with God. Over decades of being single, I’ve crafted any number of tall tales about the “one.” I’ve created a dizzying array of mantras, prayers, and scripted outcomes, wrapping them around me in the dark to numb the hurt. I confused certainty (even if fictitious) with faith, not realizing that faith demands something more elusive and lasting: trust.

In the spirit of that trust, all these years later, I’ve started wearing my grandmother’s wedding ring again. It rests on a silver chain around my neck. I took it off after my son and I adopted each other. The band is thin, purchased during the Great Depression. I remember watching my grandmother twist it as we stared down at the earth that held my grandfather. “He loved me,” she whispered as geese called to one another overhead. I held her cool, thin hand in mine as we walked back to my car.

I never imagined her ring coming to me. I only ever imagined a love like theirs, beyond promises and outward appearances. A love that was felt, embodied, real. The night my mother gifted the ring to me, I told my parents I was restarting my stalled-out adoption process. I was 43 and working hard to keep my business afloat. “Grandma’s ring?” I whispered. My mother nodded, her eyes welling. “I got the sense that she really wanted you to have it now.”

I showed the ring off to my six nieces and nephews later that night. I made them squint to see the initials engraved on the inside, the sudden buoyance in my spirit spilling over. My parents and I sat on my brother’s front porch talking, the moon bright, magnolia blooms laden in the air. I remember holding my mother’s hands when we finally said goodnight, feeling the lightness of the ring against my skin. “I am a wife,” I told her, smiling through my tears. “I know I am. I am a wife, and I am a mother.”

Three years later, orbiting in the galaxy defined by my three-year old son, I slipped my grandmother’s ring back into the box. Indifferent to anything other than uninterrupted sleep (for longer than 45 minutes), I no longer believed in its alchemy. I had no energy to believe. No desire, either. Motherhood was intoxicating and depleting. In the unpredictable world of early childhood trauma and solo parenting, the sacred was not who I imagined the sacred to be. My scripted outcomes dried up and blew away.

But going off script, as it happened, has been freeing. Letting God be God (all by God’s self) has made room in our galaxy for exploration and surprise, for grace that sometimes precedes me and always uplifts me. Not long ago, my now eight-year-old son informed that I’d have to get married if he was to have a dad. We’d spent the week with dear friends, Anne and Jean Paul and their three children. I’d asked my son if he missed having a dad, trying to make room for whatever his feelings on that may be.

Instead, he zeroed in on my next steps. I explained that people marry at all ages, some young, some old, some not at all. I told him that the only thing he needed to focus on was that he would have to love that person as much as I did, whoever that person may be. He pondered this for a moment, holding his spy glasses in his hand. “Can you marry Anne?” he asked. I chuckled, instantly understanding his choice. I reminded him that she was already married. “To who?” he asked incredulously. Jean Paul. “Oh.”

Wearing my grandmother’s ring reminds me that my desire is much simpler than in the past. I pray to expand my circle of love, outward and in any direction. Unlike my teenage self, I know that the sacred is interested in me and the particulars of my life as much as the sacred is in yours. Touching her ring I am reminded to lean back and trust. God is far bigger than anything I could ever foresee.