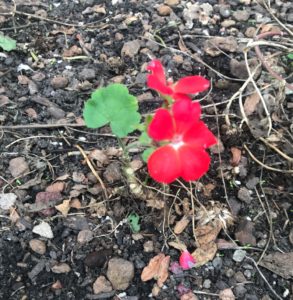 I pulled up my garden today. It was a sad affair, leggy petunias and dried up purple salvia next to the red replacement mums that have refused to flower. I trimmed the browning dahlias and removed the daisies. The arid and rocky soil seemed only partially to blame. The dying roots surrendered with ease. We are all so worn out, I thought to myself, as the late summer sun dipped behind a cloud.

Yet, in the clearing, to my delight, stood the tiniest geranium. One skinny stem and two bright red blooms. Fragile and resilient. I stared at it with reverence.

I have found it hard to bloom lately. The dual pandemics—COVID and systemic racial injustice—are unrelenting. The isolation and loneliness, alone, are daunting. I used to think that an 18-day winter break at home with my son was a lot to navigate as a solo parent. But we are nearing the six-month mark, and there is no end in sight. The same is true of the news cycle: more lives being lost, more people being killed, more gun violence, more hatred.

And still, the tiniest red geranium thrives despite the inhospitable soil. Perhaps we are all more fragile and resilient than we realize. In my own life, that geranium-kind-of-hope tends to take me by surprise, upheaving my magical thinking (which likes to map out the future in my mind) and rooting me in the here and now. Faith, I have learned, is much the same.

Fifteen years ago, in the midst of a different kind of untenable situation, my mother reminded me that I was born on the feast day of the Visitation, the day Mary traveled to see Elizabeth. Like me, Elizabeth was barren—but unlike me, she was also miraculously expecting. Her husband, a high priest, doubted God (as I often do). As the story goes, the angel Gabriel struck Zechariah mute until his son, John the Baptist, was born. Why, I could not pretend to know.

That night, as I poured over the Old and New Testament, I sat transfixed by an infertility narrative that left me with a sense of solidarity and bewilderment. What did it say about God?

The story begins with the first matriarch, Sarah, who laughed bitterly when she heard she would bear a son at the age of 90. After all those years? Abraham had actually pleaded with God that his son, Ishmael, born of Sarah’s maidservant, be his sole heir. But God insisted. “I will bless Sarah, and I will give you a son by her. Him also will I bless; he shall give rise to nations, and rulers of people shall issue from him.”  Upon Isaac’s birth, Sarah laughed with joy.

But those nations did not give rise so easily. Like his father, Isaac had to implore God for a son. He and his young wife, Rebekah, waited 20 year before she gave birth to twins, Esau and Jacob. Isaac was 60 years old. And, while their grandchildren would grow in abundance, Jacob’s beloved second wife, Rachel, remained barren. His first wife, Leah, bore six sons and a daughter. The maidservants bore four more sons. A trusted mid-wife, Rachel delivered baby after baby, but none of her own making.

One night, she beseeched Jacob: “Give me children or I shall die!” To which he retorted angrily: “Can I take the place of God who had denied you the fruit of your womb?”

Yet, her cries to God never ceased. Neither did her belief in her deepest of desires. Many years would pass but she would give birth to a son, Joseph. As the story goes, he was later sold into slavery by his jealous brothers and then rose to be second in command next to the Pharaoh. Rachel did not live to see his glory. Nor did she live to hold her second son for whom she prayed so desperately.

My own prayers for my son were answered quite differently. At 42, in the middle of a recession and an unrelenting patch of unemployment, I was invited to re-start my adoption process. I’d put it on hold for the two very same reasons. Paralyzed with indecision, I found it impossible to pray. My heart held one story: my deepest knowing that I am a mom. My mind held another: fear. A colleague whom I barely knew asked me to join her at a drumming retreat. To  my surprise, I agreed.

Lying there on my blue yoga mat, I decided to close my eyes and let the sound of the drums do whatever they had been doing for centuries. Each of the three meditations brought a new image: a waterfall so powerful it roared in my ears and pulled me inside of it. A lake so still that the pressure in my chest opened up and flew away. A bright red bloom so delicate that I cupped it in my hands, in awe.

That night, I fell into the deepest sleep. I awoke to the impatient buzzing of my doorbell. I opened the door to find my upstairs neighbor standing there, clean-shaven with a suitcase beside him. In his hand was a small potted plant. “This little guy needs some love. Can you take care of it while I’m gone?” On each of the shoots were bright red blooms.

Three years later, my son and I adopted each other. Like Sarah and Rachel before me, I do not understand how God works. Not then, and certainly not now. But the faithfulness of God never ceases to amaze me. Saint Ignatius taught that in everything, the sacred moves. That every person, every situation, every moment has the capacity to reveal something of God, to draw us closer, to help us make a return of love more readily.

Like that tiny red geranium in my empty garden bed, we are called to live into the fullness of who we are. One moment, one hour, one day at a time. Because even desolate landscapes—and seemingly impossible times—can birth hope in us and all around us.