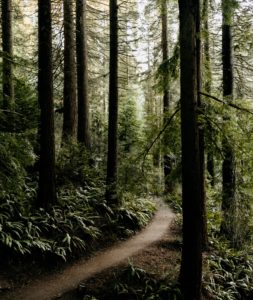 62.5 more miles to go on my pilgrimage. The Camino de Santiago has been around for more than a thousand years. It’s 480.8 miles across the rolling hills of northern Spain. Medieval pilgrims started where they were. I did the same, virtually, as the pandemic dictated, at the start of 2021. I like being among a legion of pilgrims from around the globe—every faith, hue, and nationality—who are seeking something more.

It’s just that I thought I’d already be changed by now. 365 days into this pilgrimage, I imagined that I’d have perfected a daily exercise regimen. Recommitted to a consistent prayer practice or eaten more leafy vegetables. Something tangible, at the very least.

But the reality is I walked 418.3 miles by hook and by crook, as they say. A walk around the neighborhood park one weekend. Up and down my hallway the next. Some days I had to negotiate with my son to get out of the house; other days, I didn’t even try. My approach was haphazard and spontaneous. Sometimes stymied by the pandemic, other times by my lack of desire to exercise. Or the comfort of my pajama pants.

And now, here I am entering the home stretch, wondering why it is I expected my transformation to be completed right on time. I am impatient with being “on the way” to something.

For as long as I can remember, I have written narratives in my head, choregraphing dreams, facilitating pretend conversations, navigating life-changing events. In my mind, the destination is clear, and I am already there. In my younger days, I created and recreated an engagement scene. Later, I zeroed in on publishing a best-selling memoir, speaking on NPR, traveling abroad.

I used to relish that escape. It was so easy to slip into. Comforting and affirming. Tantalizing, even. In those narratives, I was not afraid. I did not worry about being enough. I had everything and everyone I needed. It was all right there, mapped out for God to follow along. Only I guess the divine wasn’t interested in coloring by the numbers.

It turns out God is far more creative than me when it comes to our unfolding. I still remember the day I got my first book offer. I could not speak. I sat in the publisher’s office, next to the executive director of Inspiration Café, the setting of my first book where I had volunteered to serve breakfast for years to men and women experiencing homelessness. I was 37 years old at the time, a novice writer, unpublished. The executive director kept looking and smiling at me. The publisher did too. I nodded. A lot.

I had always envisioned that moment being so much more eloquent. Not to mention, joyous. I’d had plenty of pithy things to say in my imagination. But no words came that afternoon. I shook the publisher’s hand and walked back to my car. “You should be jumping up and down!” the executive director hollered at me. “I know,” I finally said, smiling.

I had been in between for so many years, questioning my creative voice and my deepest sense of myself, that it took some time for the destination of “author” to sink in.

Unbeknownst to me that day, the oral histories that I had collected for over 14 months would not only become a book, they would later be produced as a play. They would be discussed on radio talk shows and the national news. The book itself, A Recipe for Hope, would get its own Library of Congress number and be placed in public libraries across Chicago, so anyone experiencing homelessness could read it too.

Maybe being “on the way” had been worth it. I remember how the publisher initially offered to do a small print run, 2000 books at most he said. It did not feel like a strong show of confidence. I shared this with my family. To my complete surprise, one of my brothers called the publisher and ordered 1000 books to prove him wrong. In the end, we sold over 4000 books and went into reprints with most of the proceeds going to support the work of Inspiration Café, helping more men and women turn their lives around.

I had not imagined any of that. Nor had I foreseen that for the next 10 years, a group of six men and women featured in the book, whom I call family—Rodney, Kimi, Ericstina, Gloria, Erick, and Shiriony—would speak with me at churches, high schools, community colleges and universities. Most of our audiences had never met people who were no longer homeless. Their stories changed hearts. They were, in a word, transformational.

That is my hope once again, to not only be transformed but to use my words to transform and inspire. I’m just not sure how. But what I am reminded (once again) is that the sacred does not need me to map out a perceived destination. I just need to show up as I am, unencumbered by expectations, to be both vulnerable and free.

My goal for the next 62.5 miles is to let go of the narratives in my head and to lean into where I am right now: in between. We’re not meant to skip over the not knowing, the unfolding. Even if it takes longer than 480.8 miles. It’s all part of being “on the way.” And it is all holy ground.

Perhaps faith is walking into the more of who we are, one step at a time, without ever knowing the destination and trusting that God has a far greater vision than our own.

As mystic and poet, Rainer Maria Rilke, wrote: Go to the limits of your longing.

God speaks to us as [s/he] makes us,
then walks with us silently out of the night.

These are the words we dimly hear:

You, sent out beyond your recall,
go to the limits of your longing.
Embody me.

Flare up like a flame
and make big shadows that I can move in.

Let everything happen to you: beauty and terror
Just keep going. No feeling is final.
Don’t let yourself lose me.

Nearby is the country they call life.
You’ll know it by its seriousness.

Give me your hand.

2 thoughts on “Being On the Way: A reflection on trust”