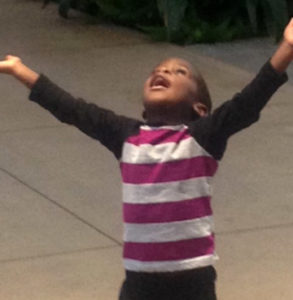 Never in all my years as an educator did I imagine that my son would struggle in school, demonstrating behaviors that would give any teacher pause. The sudden change in him mirrored the immense fear of loss he carries inside his lanky 41” frame. In less than six weeks, we moved to a new neighborhood, he got new teachers, and he lost four of his school buddies—all boys—to out-of-state moves and parochial schools. I felt a sudden urge to nail everyone in place for him, but instead of being able to fix this for him, I learned to lean into the school’s embrace.

I remember joking as a first-year teacher that I was too young for the job. My 23-year old self tried hard to act all grown up during the parent-teacher conferences in which, to my surprise, I was the teacher. “I really don’t think parents should listen to me,” I’d confide to my roommate. Our launch into education was rather atypical twenty-five years ago. I was a history major; she a theology major. Neither one of us had stepped into an elementary school since we’d stepped out of our own. We had both agreed to teach for two years in underresourced schools. We naively assumed it would be easy.

The Friday before school started I was hired to teach fourth grade. I walked out of the interview and drove straight to the teacher store and bought up bags of spiral-bound notebooks, erasable pens, a cursive alphabet and matching bulletin board trim, a globe, and twenty-five bottles of glue. The next morning I lugged it all to the trailer that was to be my classroom. Beads of sweat dripped down my back. It was August in Texas and hotter than anything I’d ever known. My school was next to the highway and surrounded by overgrown industrial lots. The yard outside the main building had no playground equipment, just an old oak tree gnarled with time.

The inside of the prefab trailer was musty and dim with two narrow windows that did not open. Mismatched desks lined the walls. I counted them three times, hopeful that I’d made some kind of mistake and that there really would be enough to seat my roster of twenty-two. Undeterred, I turned on the air conditioner and set to work, scouring every visible corner with Lysol and scrounging up two sets of dictionaries, a couple of extra chairs, and an eraser that had been left outside by the dumpster. When I arrived that Monday, the first day of school, I was pregnant with hope, naiveté, and self-assurance.

But from everything I could tell in those first weeks, Stephen and Brittany couldn’t read beyond a second grade level. Sonya and Crystal, like many of their classmates, were eager to write but filled their journals with incomplete sentences, little to no punctuation, and loads of misspellings. Elizabeth never said a word. Quincy did every math problem I gave him, and Danielle wore the same t-shirt every day. By the time recess came around, I was so drained that all I could do was lean against the side of the building and wonder who it was they were talking to every time I heard them call, “Miss Skalitzky! Miss Skalitzky!”

I worked past midnight most nights and woke up early to finish lesson plans or write back in their journals. I poured over teacher manuals and stained my hands purple from the ditto machine. I checked out loads of books from the public library and purchased more than I care to admit. That first year of teaching taught me how to rise. The following year, I won a grant from the business community to publish a quarterly literary magazine filled with student’s writing from every grade. By the end of my two-year commitment, I believed teaching was my passion, my life’s aspiration.

I went on to graduate school and became a literacy specialist. I worked with students in jeopardy of not going to high school. I read with gang members and teenage boys who told me they’d never read about protagonists who looked and talked like them. I helped open a charter school in a forgotten city neighborhood. I coached teachers and principals and even a few district leaders. But none of that prepared me for my son’s fall from grace. I cried openly in front of his teachers, giving them a window into the challenges we faced at home as well.

In return, I received countless hugs. I got emails from the school directors telling me I was an awesome mom. I had strategy sessions with his teachers, witnessing their tenacity in the face of some exceptionally hard days. And I heeded the advice of seasoned teachers who told me this too shall pass. In the end, it took about three weeks for this net of support to envelop my son. He skips happily into school these days, so much so, that during the Halloween parade, he only wanted to hold his friends’ hands (and not mine).

I can’t help but marvel at my son’s transformation, and my own as well. I’m used to being the giver, the one in charge. The one who responds to other people’s needs. The second half of that equation never really concerned me. Being on the receiving end of all that compassion reminded me that I am not alone, even as a single mom. In everything the sacred moves, bringing us into ever-widening circles of communion. All the love that I poured into my students got showered back upon me as a mom. And I stretched out my arms, just like my son, and soaked it in.